Born Liverpool in 1953, Barry Morris was in the Royal Marines for 14 years serving in Northern Ireland and the Falklands as well was in Vietnam with the UN.  He left the forces in the mid 1980s and returned to a Liverpool devastated by Thatcherism.  In 1988 he began retraining as a social worker at Sunderland going into practice with Sefton Social Services in 1990.  While in Vietnam Morris kept a journal from which he developed Ghost Voices published by the Kates Hill Press in 2003.  A collection of his short stories The Book Cellar was published in 2007. He is currently working on a novel, Tiger Moth and a second collection of short stories. 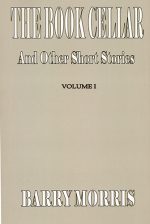 The first in a collection of sublime, outlandish and supernatural tales. Barry Morris uses his unique style, taking the reader on frenzied voyages to far-off lands and fractured time anomalies, and leisurely walks through the everyday happenings of ordinary people. The anthology contains a wide variation of stories including: The Book Cellar, a seemingly condemned bookshop receives a visit from a mysterious stranger; No Extra Time, a reluctant Football Association referee is transported back to the killing grounds of the western front to resolve a long running dispute, and The Importance Of Being Ernie, a high functioning premium bonds computer acquires sentience after forming a relationship with a disabled woman. Plus: The Talisman, will an apparently bogus amulet finally yield good fortune? Gate 17, an enigmatic messenger takes a disenchanted England football supporter on a nightmare excursion; Suicide Ride, a shell shocked war veteran replays his final moments as he heads for an underground station; Stolen Childhood, an entrepreneur’s identity is threatened after a burglary, and Swansongs, two lateral stories detailing the history of a 1950’s Buick Sedan and the life of a Bewick’s Swan as they undertake their final journeys. The anthology also includes a collage of chronicles from the author’s life.
not rated £9.30 Add to cart
[/tab]
[tab title=”Social History”]

"You round eyes, you come to my country, point your fingers , condemn our beliefs, rubbish our culture, try to change our values. What you know of values?" Set within the turmoil of the Vietnam war, Ghost Voices is a stark depiction of the affects of combat upon some of the men of 2 Bravo 6 Platoon Royal Marines.; their relationships, attitudes and reactions to dealing with the perpetual boredom and sudden horrors that peacekeeping can bring. Barry Morris reveals what others often omit; the unrelenting struggle to overcome fear and the powerlessness of having to witness abuse of non combatants. All monies from this title go to Amnesty International.
not rated £9.29 Add to cart
[/tab]
[/tabs]